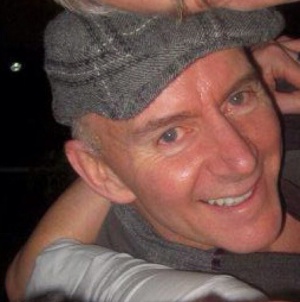 David Gwinnutt
David Gwinnutt (born 1961) is a photographer. In 2005 he invented the PinkJack flag: a version of the Union Jack with pink replacing the normal blue.

From an early age David Gwinnutt photographed, partied and mixed with some of modern history’s most iconic gay figures including Robert Mapplethorpe, Quentin Crisp, Leigh Bowery and Gilbert and George.[1]

During his twenties, he was disenchanted by the symbols being used by the gay community: the pink triangle and the rainbow flag. He wanted something that would celebrated Britain’s great gay culture, as well as being inclusive and meaningful to the straight community.[2]

He was ranked number 16 in the Independent on Sunday's Pink List 2013. The citation said:

"Founder of the PinkJack flag – a pink and red version of the Union Jack – and subsequent products, from badges and mugs to T-shirts, towels and coasters. The brand is said to represent 'a place where gay and straight people stand side by side.' Gwinnutt received 62 public votes."[3]