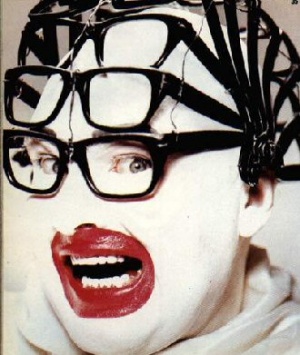 Leigh Bowery
Leigh Bowery (26 March 1961 – 31 December 1994) was an Australian performance artist, club promoter, actor, pop star, model and fashion designer, based in London. Bowery is considered one of the more influential figures in the 1980s and 1990s London and New York art and fashion circles influencing a generation of artists and designers. His influence reached through the fashion, club and art worlds to impact, amongst others, Meadham Kirchhoff, Alexander McQueen, Lucian Freud, Vivienne Westwood, Boy George, Antony and the Johnsons, John Galliano, the Scissor Sisters, David LaChapelle, Lady Bunny plus numerous Nu-Rave bands and nightclubs in London and New York which arguably perpetuated his avant garde ideas.

After attending Melbourne High School, and one year of a fashion course there, he abandoned Australia and moved to London for good in 1980, initially to make his career as a fashion designer. Although this was a financial failure, it did garner him a small cult following and media interest. Eventually he was making a name for himself by dramatic performances of dance, music, and extreme exhibitionism, while wearing bizarre and very original outfits of his own design.

Although Bowery always described himself as gay, he married his longtime friend Nicola Bateman on 13 May 1994, in Tower Hamlets, seven months before his death from AIDS-related illness at the Middlesex Hospital, Westminster[1] on New Year's Eve 1994, after a five-week battle that only a handful of friends were informed about.