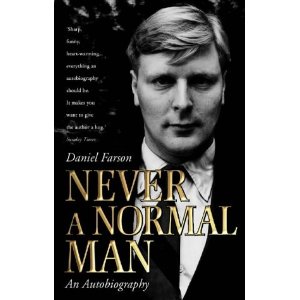 Cover of his autobiography
Daniel Farson (Daniel Negley Farson, 8 January 1927 – 27 November 1997) was a writer and broadcaster, was a popular television personality and prominent public figure in the late 1950s and early 1960s.

Born in Kensington, the son of the American journalist Negley Farson, his childhood was mostly divided between Britain and North America. He visited Germany with his father while Negley was reporting on the Nazi regime, and was patted on the head by Adolf Hitler, who described him as a "good Aryan boy". He briefly attended the British public school Wellington College, whose militaristic regime was not to his taste; Farson had become intensely aware of his homosexuality, which would sporadically cause him great emotional strain. As a teenager he worked as a parliamentary correspondent, and was pursued in the House of Commons by the predatory Labour Member of Parliament Tom Driberg.

Farson shot to fame in the 1950s when he joined Associated-Rediffusion, the first commercial television company to operate in Britain. Here he took risks that few television interviewers (certainly not those employed at the still very conservative BBC) would dare to take at the time. In his series Out of Step (1957) and People in Trouble (1958) - never shown at the same time throughout the ITV network, but much repeated in various regions well into the early 1960s - he dealt with issues of social exclusion and alienation that most of the media at the time preferred to sweep under the carpet (in this he was helped, of course, by the fact that as a gay man - a term he would not himself use even when it came to be much preferred to "homosexual" - in 1950s Britain, he could himself have fitted into the criteria of both series). The most famous editions of these series are the Out of Step programme on nudism (the term "naturism" had yet to become commonplace), which claimed to show the first naked woman on British television, and the People in Trouble programme on mixed marriages (a highly sensitive issue at the time as post-war immigrants tentatively began to integrate into British life). Their fame is at least partially down to the fact that they were repeated comparatively recently, in 1982 (on the fledgling Channel 4).

Another 1958 Farson series, entitled Keeping in Step, looked at establishment institutions such as public schools from a distinctly more distanced perspective than that seen on virtually all BBC programmes (and even most other Associated-Rediffusion programmes) of the time. A regular guest on Farson's programmes at this stage was James Wentworth Day, a reactionary British writer of the Agrarian Right school, who infamously ranted in the programme on mixed marriages, in which he referred to mixed-race children as "coffee-coloured little imps" and argued that black people must be less "civilised" than white people because "a couple of generations ago they were eating each other" (Wentworth Day's remarks were featured in Victor Lewis-Smith's series Buygones and TV Offal). Farson would usually respond to these diatribes with a polite statement along the lines of "I couldn't disagree with you more, but at least you do say what you really feel".

However, Wentworth Day's appearances would rapidly come to an end when he claimed that all homosexuals should be hanged. Farson insisted that the episode of People in Trouble in which Wentworth Day had made those remarks - concerning transvestism - was scrapped before it had been completed. He publicly insisted that the Independent Television Authority would ban it; in reality Farson was terrified that Wentworth Day would attempt to bring him to trial - a trial which would inevitably have been a high-profile event comparable to that of Oscar Wilde. After this, Farson immediately froze Wentworth Day out of his life and his programmes.

Farson also wrote the authorized biography of his friend, the painter Francis Bacon (The Gilded Gutter Life of Francis Bacon (1994) - at Bacon's insistence this was not published until after the artist's death). The 1998 film Love Is the Devil: Study for a Portrait of Francis Bacon starring Derek Jacobi and Daniel Craig draws heavily on the book, showing Farson (played by Adrian Scarborough) socialising with Bacon, as well as interviewing him on television. The film is dedicated to him. Bacon and Farson both frequented the French House.

His last book was a "portrait" of the artists Gilbert and George, published posthumously in 1999 (he had already, in 1991, published an informal account of a trip he took with them to Moscow). He devised the Channel 4 art quiz Gallery and he worked as TV critic and, later, art critic for The Mail on Sunday.