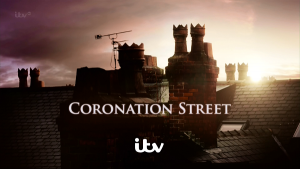 Coronation Street title screen
Coronation Street is a British television soap opera, set in the fictional town of Weatherfield in Greater Manchester. It has been appearing regularly since 1960, and was originally conceived by Tony Warren. It is now the world's longest-running soap opera.

For many years there were complaints that the show was unrepresentative in not showing any gay characters, but more recently there have been suggestions, for instance by some of the actors[1] and by Brian Sewell, that it's "too gay".[2]

Sir Ian McKellen appeared in the show in 2005 as the confidence trickster and supposed novelist Mel Hutchwright.

Besides Antony Cotton and Charlie Condou, other LGBT people who have appeared in the show include Peter Dudley, Heather Peace and Jane Hazlegrove.