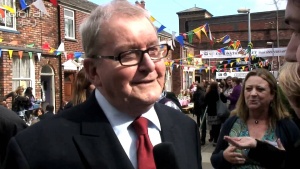 He was born in Pendlebury, Lancashire. He trained at the Elliott-Clarke theatre school in Liverpool, and adopted Warren as a stage name in his early acting career.

Warren was openly gay from his early years on Coronation Street, at a time when homosexuality was illegal. He said that he experienced homophobic treatment from some of the other writers.[1] Warren also battled with drug and alcohol addiction before attending rehabilitation.[2]