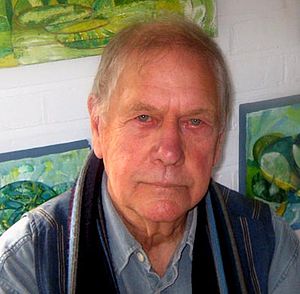 Colin Spencer in 2011
Colin Spencer (born 1933) is a writer and artist. He has produced novels, cookery books and stage and television plays. His visual work includes drawings. paintings, and magazine and newspaper illustrations.

Colin Spencer was born in Thornton Heath, South London, went to school in Brighton, and studied at Brighton Art College. He spent his period of National Service as a pacifist in the Royal Army Medical Corps in war-ravaged Hamburg where he treated soldiers who had contracted venereal disease.[1]He has subsequently lived in London, Vienna, Athens, on the Greek island of Lesbos, and latterly in East Sussex. He has twice been married and has one son and two grandsons.

His published works include British Food, Homosexuality: A History, and novels including Panic, Asylum, and the novel sequence Generation.

A series of drawings of writers of our time was published in The Times Literary Supplement in 1959. Those he portrayed included John Betjeman, E M Forster, Angus Wilson, Evelyn Waugh and John Lehmann. An oil portrait of E M Forster hung for many years in his rooms at King's College Cambridge. On his death Forster left it to Benjamin Britten and Peter Pears and it is now in the Britten-Pears Library in Aldeburgh.

Travelling Player by Colin Spencer
The first volume of his planned three-part autobiography was been published by Quartet Books, in April 2013. Backing into Light: My Father's Son tells the story of the first three decades of his eventful life through his wartime boyhood dominated by his raucous, womanising but irrepressible father, to his first successes in the 50s and 60s as an artist, novelist and playwright. They were years which saw ardent affairs with both women and men, a stormy marriage, the birth of a son, and a traumatic divorce. The book has been described as “full of clear-eyed observation and thoughtful reflection, as well as comic incident … unflinchingly honest and exuberantly entertaining,”[2] while The Spectator finds it “a remarkable autobiography which subverts everything you thought you knew about love and life.” [3]