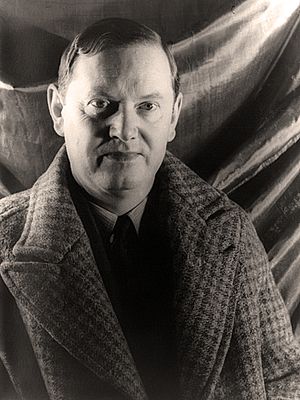 He was born in West Hampstead. His older brother Alec Waugh had attended Sherborne School, and Evelyn was originally intended to go there as well, but Alec was asked to leave in 1915 because of a gay relationship, and in 1917 published a novel The Loom of Youth including references to homosexual friendships at school. The resulting scandal meant that Evelyn could not go to Sherborne, so he was sent instead to Lancing College where he made friends with Tom Driberg.

In 1922 Waugh went up to Hertford College, Oxford, and became part of an avant-garde circle known as "the hypocrites" led by Harold Acton and Brian Howard. He had several homosexual relationships while at Oxford, including with Richard Pares and Alastair Graham.[1]

He worked briefly as a schoolmaster, and then as a full-time writer and journalist. He served in the Royal Marines and then in the Royal Horse Guards during the Second World War.

In 1928 he married Evelyn Gardner, daughter of Lord and Lady Burghclere. The couple were known as "He-Evelyn and She-Evelyn", but they were divorced the next year, and the marriage was formally annulled (declared never to have existed) by a Roman Catholic church court in 1936. The annulment was necessary because Waugh had became a Roman Catholic in 1930 (having been drawn to high Anglicanism as a boy but later rejected religion) and wished to marry again. In 1937 he married Evelyn Gardner's cousin Laura Herbert. They had seven children, including the journalist Auberon Waugh.