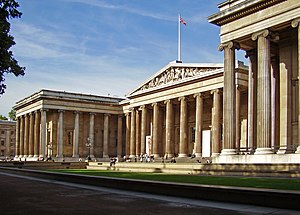 The British Museum, in Bloomsbury, central London, founded in 1753, is one of the greatest museums in the world, noted for exhibits such as the Elgin Marbles and the Rosetta Stone. Until 1997 it also housed the British Library and its famous circular Reading Room.

The Director of the British Museum (since 2002) is Neil MacGregor. A previous Director (from 1969 to 1973) was Sir John Wolfenden, who had chaired the Committee that recommended the decriminalisation of homosexuality.

The museum houses a number of items of LGBT interest, notably the Warren Cup.

In 2009 the museum hosted the pre-launch for LGBT History Month 2010, and in 2011 it launched an LGBT Trail.[1] R B Parkinson, one of the Museum's curators, worked on the Trail and has gone on to write a book about the objects, A Little Gay History: Desire and Diversity Across the World.