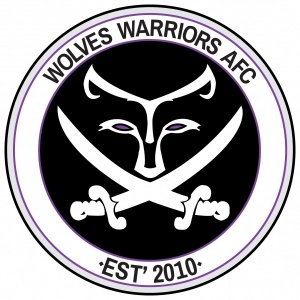 Club logo
Wolves Warriors AFC is a gay-friendly football club based in Wolverhampton.

The club was formed as Wolverhampton Harts GFC' in November 2010 to give the gay community in Wolverhampton an outlet to play football. The brain child of Jack Drawbridge and Andy Corfield, the club held its first training session on 14th December 2010.

The aim of the club is to provide a relaxed approach to playing football regardless of age, ability or sexuality. It also serves to provide a social outlet bringing people together from different walks of life.

The club competes in the Midlands Unity League and played in the GFSN National League Division 3 in 2012–3.[1]

In October 2013 it changed its name to Wolves Warriors AFC.