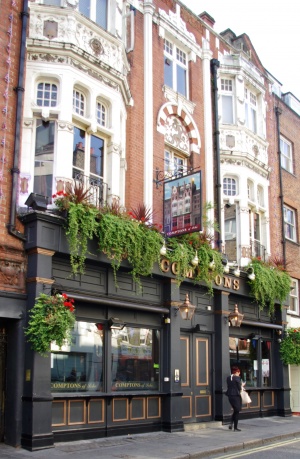 By 1986 the Swiss Tavern had been renovated and renamed "Comptons Of Soho" as a gay bar.[2] In November 2006 it celebrated its twentieth anniversary, at which time QX Magazine referred to it as "The Grand Dame of Queer Street" [2]

It is a traditional British pub, formerly with a central bar which one could walk right around, now moved to the side to give more space to punters. It has been described as Britain's highest grossing pub for its size.

Poets Dylan Thomas and Brian Howard (when it was called the Swiss). Film director Derek Jarman was often seen drinking in Comptons.