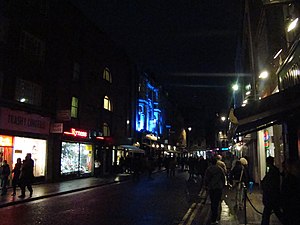 Comptons of Soho, originally called the Swiss Hotel, is the original gay bar located on that street, a traditional British pub, formerly with a central bar which one could walk right around, now moved to the side to give more space to punters. It is often referred to a Britain's highest grossing pub for its size.

The street now hosts many other venues such as the Admiral Duncan, Balans and Balans Cafe, Clone Zone, many popular patisseries including Valeries, and The Village bar stands at the head of the street on Wardour Street.

On 30 April 1999, two people were killed and many injured when the Admiral Duncan pub was blown up using a nail bomb. It was a Friday night and the start of a long bank holiday weekend. Many people had finished work and were enjoying the spring evening in Soho.

Film director Derek Jarman was often seen drinking in Comptons when he was alive.