From LGBT Archive
(Redirected from Swinburne)
Jump to: navigation, search 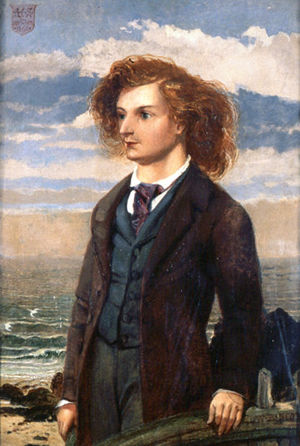 Swinburne was born at 7 Chester Street, Belgravia, and educated at Eton and at Balliol College, Oxford. His father was a Royal Navy captain, later an admiral. Swinburne attracted attention with the choruses of his Greek-style tragedy Atalanta in Calydon (1865), and the eroticism of poems such as "Laus Veneris" (In Praise of Love), "Dolores", and "A Litany" in Poems and ballads (1866). However he and Dante Gabriel Rossetti were attacked in 1871 as leaders of the "fleshy school of poetry", and the revolutionary politics of Song before Surnrise (1871) alienated others.

Algernon Swinburne was a rebel in his youth who became an honoured scholar and poet in later life. His First Series of Poems was shocking for its time and was withdrawn by its original publisher. The resulting notoriety made Swinburne's career.

Swinburne's tendencies toward overindulgence and self-destruction were subdued by his companion, Theodore Watts Dunton, who provided a stable home where Swinburne could write. Swinburne was a frequent contributor to The Pearl, one of the few outlets for gay literature in Victorian England.

Many of his writings remain unpublished, presumably unpublishable.

Swinburne is considered a decadent poet,[1] although he perhaps professed to more vice than he actually indulged in; Oscar Wilde stated that Swinburne was "a braggart in matters of vice, who had done everything he could to convince his fellow citizens of his homosexuality and bestiality without being in the slightest degree a homosexual or a bestialiser."[2]

In fact Algernon Swinburne was quite surely gay. His poetry was "overly sensuous" according to critics. "He and gay painter Simeon Solomon used to chase each other naked through the poet Rossetti's house."