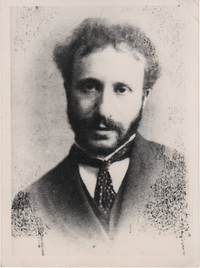 Simeon Solomon
Simeon Solomon (1840–1905) was a painter, thought to be the only gay member of the Pre-Raphaelite movement.

Simeon was born as the youngest child of a Jewish family in London; a sister and brother were both painters. While studying at the Royal Academy Schools, Solomon was introduced through Dante Gabriel Rossetti to other members of the Pre-Raphaelite circle, as well as the poet Algernon Charles Swinburne and the painter Edward Burne-Jones in 1857.

His held exhibitions of his work at the Royal Academy between 1858 and 1872. In addition to the literary paintings favoured by the Pre-Raphaelite school, Solomon's subjects often included scenes from the Hebrew Bible and genre paintings depicting Jewish life and rituals. In 1865 he produced illustrations for Swinburne's pornographic novel Lesbia Brandon[1][2]

In 1873 Solomon was arrested at a public urinal at Stratford Place Mews, off Oxford Street, central London, and fined £100 for attempted sodomy.[3] The following year he was arrested again in Paris, and he was sentenced to three months in prison.[3][4][5][6]

In 1884 he was admitted to the workhouse where he continued painting. In 1905 he died from complications brought on by his alcoholism. He was buried at the Jewish Cemetery, Willesden.