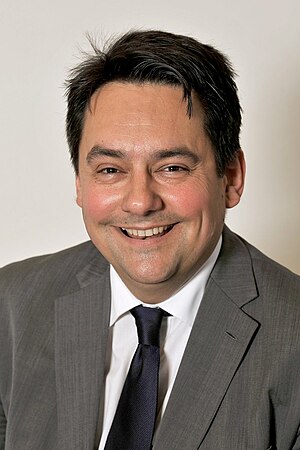 In 1990 he became the youngest and first openly gay president of the National Union of Students.[1] He was later a councillor in the london Borough of Islington.

In the 1997 general election he was unexpectedly elected for Enfield Southgate, defeating the sitting MP Michael Portillo, and becoming the first man to be openly gay at the time of being elected. He was re-elected in 2001, and became Minister of State for School Standards. but lost his seat in 2005.

In December 2005 he was arrested in central London for being drunk and incapable in a public place fined £50. He commented "I had had a lot to drink and I think it [the police action] was sensible. I have no complaints whatsoever. I take full responsibility for my actions." [2]

At the 2010 general election he was elected for Liverpool West Derby. In 2011 he was appointed Shadow Secretary of State for Education. he stood down at the 2019 General Election.