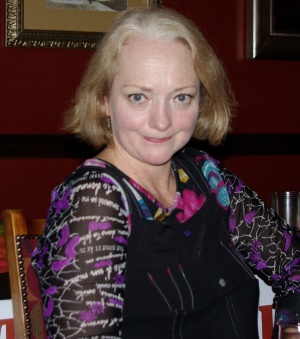 Stella Duffy in 2012
Stella Duffy (born 1963) is a British lesbian novelist and performer.

She was born in Woolwich but spent her childhood in New Zealand[1] and studied English Literature and Drama at Victoria University, Wellington.[2] Duffy is a practising Buddhist and lives in Lambeth with her partner, playwright Shelley Silas.[3][4]

As a stage performer, she is an associate artist with Improbable, has been a member of the comedy improvisation company Spontaneous Combustion since 1988 and has guested with The Comedy Store Players. She has performed her solo show "Breaststrokes" (Time Out and The Guardian Critic’s Choice) in London, Belfast, Cardiff, Dublin, York, and Amsterdam.

In 2008 she wrote and presented a documentary for the BBC's Time Shift strand called How to write a Mills and Boon[5] where she took on the challenge of writing a Mills and Boon romance novel.

Stella Duffy has twice won the Stonewall Writer of the Year Award: in 2008 for The Room of Lost Things and in 2010 for Theodora: Actress, Empress, Whore.

Novelist Duffy said in an interview with the Independent last year: "No one ever says 'He's a straight; she's a heterosexual', but I'm constantly being called 'a lesbian' and it's just not the most interesting thing about me." Duffy has been a vocal crusader for gay marriage and formed a civil partnership with the playwright Shelley Silas in 2004.[6]