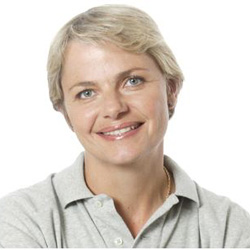 Alice Arnold
Alice Arnold is a newsreader and continuity announcer on BBC Radio 4.

After gaining a degree in politics at the University of Sussex, she trained as an actress and was a magistrate for ten years.

Arnold joined the BBC Radio Drama Company in 1988. After meeting Peter Donaldson at a party in 1994, she joined Radio 4's presentation team in that year. In 2004, she became a newsreader, and now regularly reads the afternoon and evening news on Radio 4. In 2005, she featured as a news presenter in BBC Two comedy Broken News. In June 2006 she was promoted to read the news on Radio 4's Today programme. From 2007 she has co-presented comedian Jon Holmes's show Listen Against, a parody of various programmes on Radio 4. A second series of Listen Against was broadcast in November and December 2008, and a third began in September 2010.

She is in a civil partnership with the BBC presenter Clare Balding.[1] They live in Chiswick. Arnold was previously in a relationship with the comedian, writer and presenter Sandi Toksvig.[2]

Arnold gained some media coverage in May 2012. While returning home, stuck in traffic, she observed an empty plastic bottle being thrown from the car ahead of her and threw it back into the vehicle through an open window. On twitter, colleague and friend Corrie Corfield said Arnold deserved a damehood for her action.[3][4]