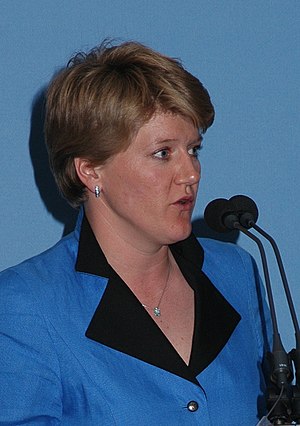 Clare Balding, 1971
Clare Balding (born 1971 in Kingsclere, Hampshire) is a BBC sports presenter, journalist and jockey. In 1989 and 1990, Balding was a leading amateur flat jockey and Champion Lady Rider in 1990. She was educated at Downe House in Berkshire where she was Head Girl, and studied English at Newnham College, Cambridge where she was President of the Cambridge Union Society in Easter 1992 and graduated in 1993 with a 2:1 honours degree.

In September 2006, she formalised her relationship with the BBC Radio 4 continuity announcer and newsreader Alice Arnold by entering into a civil partnership. They live in Chiswick, London.

In July 2010, Balding made a complaint to the Press Complaints Commission over an article by writer A A Gill in The Sunday Times that she felt had mocked her sexuality and appearance and for which the newspaper refused to apologise.[1] The PCC found in her favour, judging that A A Gill had "refer[red] to the complainant's sexuality in a demeaning and gratuitous way".

Balding was the Royal Television Society's "Sports Presenter of the Year" in 2003. In the same year, she won the "Racing Journalist of the Year Award" and has followed up with the award for "Racing Broadcaster of the Year". Balding has written regular columns for The Observer, the Evening Standard and The Sporting Life.