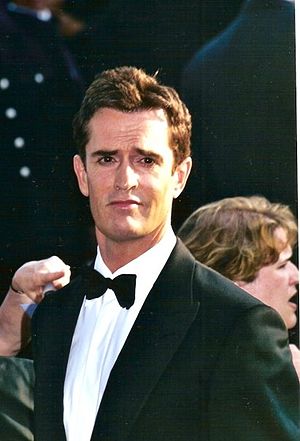 Rupert Everett at the 2004 Cannes Film Festival
Rupert Everett (Rupert James Hector Everett, born 1959) is an actor. He has appeared in many films, including Another Country, My Best Friend's Wedding, An Ideal Husband, The Next Best Thing and the Shrek sequels.

He was born in Burnham Deepdale, Norfolk. He ran away to London aged 16 to become an actor, and worked as a rent boy to support himself.[1] He studied at the Central School of Speech and Drama but was dismissed for insubordination, and then got a job at the Citizens' Theatre in Glasgow.

In 1981 he got a part as a the gay schoolboy "Guy Bennett" (modelled on Guy Burgess in Another Country at the Greenwich Theatre and then the West End, followed by the film version in 1984.

In 1989 Everett moved to Paris, where he wrote the novel Hello, Darling, Are You Working? and came out as gay, which he later said may have damaged his career.[2]

In 2006 he revealed in his memoir ''Red Carpets and Other Banana Skins that he had had a six-year affair with the television presenter Paula Yates.[3] However he has described himself as homosexual rather than bisexual. "I was basically adventurous, I think I wanted to try everything."[4]

In 2012 he starred as Oscar Wilde in David Hare's play The Judas Kiss.