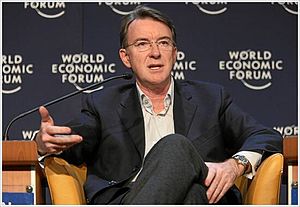 Peter Mandelson, 2008
Peter Benjamin Mandelson, Baron Mandelson of Foy (born 1953) is a Labour Party politician. He was MP for Hartlepool from 1992 to 2004, and served in a number of Cabinet positions.

From 2004 to 2008 he was a European Commissioner. In 2008 he returned to the government and was appointed a life peer.

In October 1998, during his first period in the Cabinet, Mandelson was the centre of media attention when Matthew Parris gay former MP and then Parliamentary sketch writer of The Times) mentioned during a live interview on Newsnight, in the wake of the resignation of Ron Davies, that "Peter Mandelson is certainly gay".[1]

In 2000, Mandelson publicly recognised his relationship with long-time partner Reinaldo Avila da Silva by allowing photographs of them together.[2] Da Silva is Brazilian born but was naturalised as a British citizen around the end of August 2005.[3]