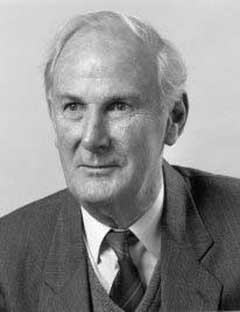 Patrick Trevor-Roper
Patrick Trevor-Roper (7 June 1916 - 22 April 2004), British eye surgeon and pioneer gay rights activist, was one of the first people in the United Kingdom to "come out" as openly gay, and played a leading role in the campaign to repeal the UK's anti-gay laws. He was born in Northumberland, the son of a doctor, and the brother of historian Hugh Trevor-Roper. He was educated at Clare College, Cambridge and the Westminster Medical School. During World War II he served in the Royal New Zealand Army Medical Corps in the Mediterranean. After the war he became a specialist in ophthalmic surgery, and divided his working life between work in public hospitals and a lucrative private practice in London.

In 1955 Trevor-Roper agreed to appear as a witness before the Wolfenden Committee, which had been appointed by the British government to investigate (among other things) whether male homosexuality should remain a crime. He was one of only three men who could be found to appear as openly-gay witnesses before the Committee. The others were the journalist Peter Wildeblood (who had been convicted of a homosexual offence) and Carl Winter, director of the Fitzwilliam Museum.

Trevor-Roper told the Wolfenden Committee that the majority of gay men led normal and well-adjusted lives, posed no threat to children or public morality, and that homosexuality was not a physical or mental illness. He pointed out that the existing laws did nothing but encourage blackmailers. He argued that the age of consent should be lowered to 16, and told the committee that many young gay men committed or attempted suicide because of isolation or depression induced by homophobia. These were highly controversial views in the 1950s. Trevor-Roper's testimony helped persuade the Committee to recommend that male homosexuality should be decriminalised, which was finally done, after a long political struggle, in 1967.

Trevor-Roper remained an active gay rights activist, campaigning in particular for the abolition of the discriminatory age of consent laws. (The 1967 law set the age of consent for male homosexuals at 21, while the heterosexual age of consent was 18.) When the AIDS epidemic appeared in the early 1980s, Trevor-Roper was one of the founders of the Terrence Higgins Trust, the United Kingdom's leading AIDS service organisation, which held its first meeting at his home.

The other cause to which Trevor-Roper devoted himself was better access to ophthalmic medicine, both in the United Kingdom and in African countries. He campaigned successfully for the repeal of British laws which prevented the sale of cheap spectacles, against the resistance of the opticians' lobby. In 1983, he helped finance Peter Risdon in his successful challenge to the opticians' monopoly in the UK, a challenge that led directly to the legalisation of the sale of reading glasses without prescription. He founded the Haile Selassie Eye Hospital in Addis Abeba, Ethiopia, and assisted in the founding of similar hospitals in Nigeria and Sierra Leone. He was also active in heritage conservation causes in the United Kingdom.