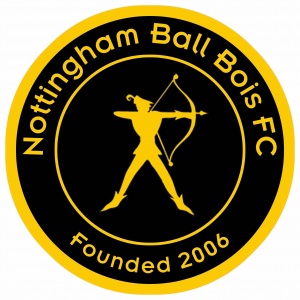 Nottingham Ball Bois FC, founded in 2006, is a gay community football club based in Nottingham, playing in the GFSN National League and the Midlands Unity League.

Home games are played at Gresham Playing Fields in West Bridgford, Nottinghamshire. Training takes place on Sundays, also at Gresham but on 3G artificial surface. The club also runs a midweek 5-a-side session on Tuesday at Harvey Hadden Sports Complex, within the City of Nottingham boundaries.

The first Nottingham Ball Bois session was held on May 14, 2006, a kick-about attended by ten players at Gresham Playing Fields in West Bridgford, Nottinghamshire. Interest in the club grew rapidly, with the team's first friendly match played on July 23 2006 at home, on Gresham Playing Fields, a 3-0 defeat against Birmingham Blaze FC. The next friendly, on August 23 2006, gave Nottingham Ball Bois their first victory, a 6-5 home win against Leicester Wildecats FC. During the inaugural season, further friendly games were played, and Nottingham Ball Bois entered small-sided tournaments in Leicester, Yorkshire and Dublin.

At the end of the season, the club hosted the Ballbois First Anniversary Tournament, a shortened 11-a-side invitational tournament with Leicester Wildecats FC, Birmingham Blaze FC and London Leftfooters FC. Nottingham were defeated in the final by Birmingham Blaze following a penalty shoot-out. At the end of the 2006-7 season, Nottingham Ball Bois learned that their application to enter the GFSN Gay National League had been successful.

Nottingham Ball Bois first GFSN League season resulted in a creditable fifth-place league position out of ten teams. During the league season, Nottingham won four games, lost four and drew one. The 2007-8 season was also Nottingham's first entry into the GFSN Cup, which ended with a first round defeat to Leicester Wildecats.

The club hosted its second annual 11-a-side tournament, with the number of teams expanding to seven. The tournament was won by London Titans FC. Nottingham failed to progress past the qualifying rounds, but won the consolation vase tournament.

The GFSN League match between Nottingham Ball Bois FC and London Leftfooters FC, held on January 27, 2008, was filmed by BBC East Midlands for a report in the Inside Out series to commemorate the tenth anniversary since the death of Justin Fashanu.[1]

Nottingham Ball Bois dominated their second season in the GFSN League, winning the league title by seven points and remaining undefeated in all league matches. Nottingham won their first eight matches in the league season, securing the title with a 1-0 victory at home to Leicester Wildecats on April 26, 2009. The final game of the season, at home to London Titans, was the only league match where points were dropped, the result a 2-2 draw. The league trophy was presented after this game.

The GFSN cup competition saw Nottingham exit again in the first round.

The 2009-10 season saw Nottingham progress beyond the first round of the GFSN cup for the first time and go on to take the trophy. A hard-fought semi-final away to London Titans, which went to extra time, set up a final against GFC Bournemouth, held at Hampton and Richmond Borough FC on May 2, 2010. The match was dominated by Nottingham, who took the trophy with an 8-1 victory.

Nottingham were unable to replicate their league-winning form from the previous season, in fact with the league splitting into two at the end of the 2009-10 season Nottingham avoided relegation by the narrowest margin.

The 2010-11 Season brought mixed fortunes to Nottingham. With the GFSN League splitting into three groups of five at the end of the season, spaces in the top league were scarce, and Nottingham were relegated to the GFSN Division 2.

There was, however, some on-field success as Nottingham entered its first team in an international 11-a-side competition at the Eurogames in Rotterdam. Surpassing all pre-tournament expectations, Nottingham left the tournament as bronze medallists.