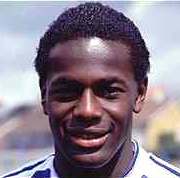 Justin and his brother John were the sons of a Nigerian barrister living in England. The parents split up and the brothers were sent to a Barnardo's home.

Justin Fashanu began his professional football career in 1978 with Norwich City. In 1981 he transferred to Nottingham Forest (becoming the first black footballer to command a million-pound transfer fee) but the Nottingham Forest manager, Brian Clough, discovered his homosexuality and barred him from training with the side. In 1982 he was lent to Southampton, and then sold to Notts County for only £150,000. He moved to Brighton and Hove Albion in 1985.

Following a knee injury he went to the United States for surgery, and later played for various teams in the USA, Canada, England Scotland and Sweden.

In 1990 he came out as gay in an interview with The Sun.[1] He was disowned by his brother John, and several former football colleagues said that gay people had no place in a team sport.

In 1992 there were tabloid reports of his relationship with Coronation Street star Julie Goodyear.

In March 1998, while living in Ellicott City, Maryland, he was accused of sexually assaulting a 17-year-old man. He was questioned by the police but returned to England without being charged. On 3 May 1998 he was found hanged in a deserted lock-up garage in Shoreditch (he had broken into the garage after visiting Chariots sauna). He left a suicide note saying "I realised that I had already been presumed guilty. I do not want to give any more embarrassment to my friends and family."[2]

The Justin Campaign has been founded in his memory, to campaign against homophobia in football, and a football team, the Justin Fashanu All-stars was named after him in 2009.