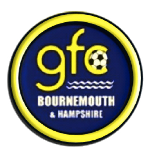 GFC Bournemouth logo
GFC Bournemouth, now GFC Bournemouth & Hampshire, is a gay football club based in Bournemouth. The club was was formed in 2005 to give gay footballers the opportunity to play the game with like-minded people. By the end of the first year the club had attracted sufficient numbers to begin playing weekly.

In 2006 the club was invited to join the 11-a-side GFSN National League. In a memorable first season, the club won both the league title and the inaugural GFSN Cup. It also entered and won the London Unity League.

In 2008 the club changed its name to "GFC Bournemouth & Hampshire" in order to better reflect its catchment area.

In 2010 the club helped to establish a new regional 11-a-side South West Gay League. However in 2011 the club left the South West League due to low member numbers. It now only takes part in GFSN National 5-a-side tournaments.