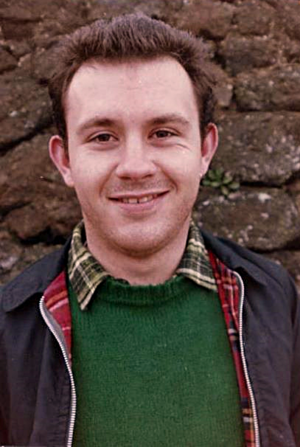 Mark Ashton in 1986
Mark Ashton (1960–1987) was a gay rights activist, socialist and member of the Communist Party of Great Britain.

Ashton was born in Oldham, and later moved to Portrush, County Antrim.[1][2] He studied at the former Northern Ireland Hotel and Catering College in Portrush, before moving to London in 1978. Richard Coles wrote about this period:

"Mark also worked for a while as a barman at the Conservative Club in King's Cross, or, rather, as a barmaid, in drag, with a blonde beehive wig. I was never sure if the patrons worked out that he was really a man".[3]

In 1982 he spent three months in Bangladesh visiting his parents, where his father was working for the textile machinery industry. On his return, he volunteered with the London Lesbian and Gay Switchboard, supported the Campaign for Nuclear Disarmament[4] and joined the Young Communist League.[2] In 1983 he featured in the Lesbian and Gay Youth Video Project film Framed Youth: The Revenge of the Teenage Perverts,[5] an early documentary that won the Grierson Award 1984 for Best Documentary.[6]

He formed, with his friend Mike Jackson, the Lesbians and Gays Support the Miners (LGSM) support group after the two men collected donations for the striking miners at the 1984 London Pride march.

After LGSM, he became involved in the Red Wedge collective[3] and became the General Secretary of the Young Communist League from 1985 to 1986.

Diagnosed with HIV, Ashton was admitted to Guy's Hospital on 30 January 1987 and died 12 days later of Pneumocystis pneumonia.[7] His death prompted a significant response from the gay community, particularly in publication and attendance at his funeral at Lambeth Cemetery.[8][9] 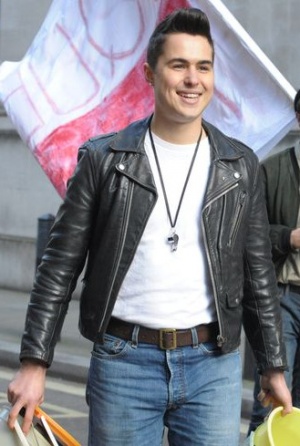 Mark Ashton is also remembered on a panel on the UK AIDS Memorial Quilt[11][12] and has been memorialised in May 2014 on a plaque at the entrance to the London headquarters of the Terrence Higgins Trust.[13]

The ballad "For a Friend" in the album Red from the The Communards was written in his memory.[14] Mark Ashton was a friend of Jimmy Somerville and Richard Coles.[15] Mark Hooper of The Rough Guide to Rock writes that this cut may be Somerville's "most impassioned moment".[14] For a Friend reached number 28 on the British charts.[16]

The LGSM's activities were dramatised in Pride, a film released in September 2014 featuring Ben Schnetzer as Ashton. Ashton's role in the Lesbians and Gays Support the Miners group was recalled in a series of interviews with some of its other members prior to the film's release.[19] However, Ashton's membership of the Young Communist League was not mentioned in the film to avoid alienating American audiences.[1] Despite Schnetzer being American, he excelled in the role and was nominated for two British Independent Film Awards.