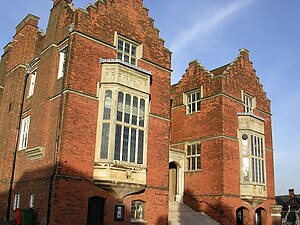 Harrow School
The London Borough of Harrow is a borough in north-west London. It is the succesor to the former municipal borough of Harrow (within Middlesex) and the only one of the London Boroughs to have exactly the same boundaries as a single previous authority. Harrow is considered part of West London for the pruposes of the Mayor of London's London Plan 2011.[1]

The original town of Harrow is noted for Harrow School, one of the leading English public schools.

The Harrow LGBT Forum was mentioned on the LGBT London website, but its own website is unavailable.[4]