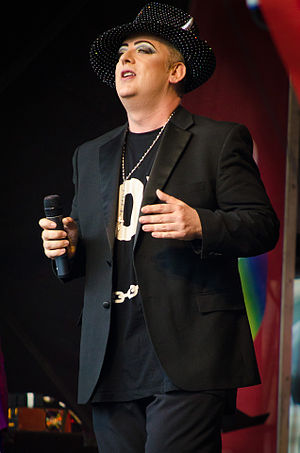 Boy George at Pride London 2012
Boy George (born George Alan O'Dowd in Bexley, 1961) is an English singer-songwriter, who was part of the English New Romanticism movement which emerged in the early-mid-1980s. His music is often classified as blue-eyed soul, which is influenced by rhythm and blues and reggae. His 1990s and 2000s-era solo music has glam rock influences such as David Bowie and Iggy Pop.

During the 1980s, Boy George was the lead singer of the Grammy and Brit Award winning pop band Culture Club where he became known for his soulful voice and androgynous appearance. He also founded and was lead singer of Jesus Loves You during the period 1989–1992.

In 1995, Kirk Brandon sued George for libel claiming that George mentioned a love affair between them in George's autobiography, Take It Like a Man. George won the court case and Brandon was ordered to pay £200,000 to Virgin Records, EMI Virgin Music and the book publisher in costs. Brandon declared himself bankrupt, which resulted in Boy George paying over £20,000 in legal fees.

In 2008, George was convicted of the assault and false imprisonment of Audun Carlsen—a Norwegian who was paid £300 at the end of a session in George's apartment on their first encounter.[1] He was sentenced to 15 months' imprisonment for these offences.[2] He was released on home detention after serving four months of his sentence, and was required to wear an ankle monitor for 90 days.[3]

When Boy George was with Culture Club, much was made of his androgynous appearance, and there was speculation about his sexuality. Although he never flatly denied that he was gay, when asked in interviews, George gave various answers. He gave a famous, oft-quoted response to an interviewer that he preferred "a nice cup of tea" to sex.[4]

In 2006, in an episodic documentary directed by Simon George titled The Madness of Boy George, George declared on camera he was "militantly gay".[5] In a 2008 documentary Living with Boy George, he talked about his first realisation he was gay, and when he first told his parents. He discloses that he understands why men fall in love with one another as well as with women.[6]

Boy George was included in the first Pink List in 2000. The citation said:

"As lead singer in the 1980s pop group Culture Club, Boy George, real name George O'Dowd, shot to fame in Britain and America. Known for his outrageous dress and flamboyantly gay attitude, he has reinvented himself as a DJ, and even appeared on BBC1's Question Time."[7]

He was listed number 69 in the Pride Power List 2011; the citation said:

Boy George was portrayed on film by Douglas Booth in the 2010 BBC2 drama documentary Worried About the Boy.

Partly based on extracts from a Wikipedia article.