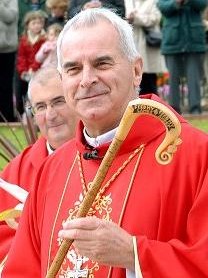 Cardinal O'Brien in 2007
Cardinal Keith O'Brien (born 1938) is Archbishop of St Andrews and Edinburgh, and leader of the Roman Catholic Church in Scotland. He was born in Ballycastle, Northern Ireland but moved to Scotland as a child. He was ordained in 1965, and subsequently worked for some time as a school teacher. He became Archbishop in 1985 and a cardinal in 2003.

Before elevation to cardinal, O'Brien was regarded as liberal on the issue of homosexuality, noting the number of homosexual priests in the Church.[1] In 2005 he rebuked Bishop Joseph Devine who had suggested that homosexuals should not be allowed to teach in Catholic schools, commenting, "I don’t have a problem with the personal life of a person as long as they are not flaunting their sexuality,".[2]

In May 2005 he told members of the Scottish Parliament that homosexuals were "captives of sexual aberrations", comparing homosexuals to prisoners in Saughton jail.[3]

In January 2006 he criticised Westminster MPs over the introduction of civil partnerships, and Holyrood members over the liberalisation of divorce laws in Scotland.[4] In July 2006 he opposed proposals to require Catholic adoption agencies to place children with gay couples.[5] In 2011 he criticised "aggressive secularism", denouncing what he claimed was the way Christians had been prevented from acting in accordance with their beliefs because they refuse to endorse such lifestyles.[6]

On 5 March 2012, O'Brien criticised the concept of equal marriage on BBC Radio 4, saying it would shame the United Kingdom[7] and that promoting such things would degenerate society further.[8] Conservative MP Margot James called these comments "scaremongering" and said: "I think it is a completely unacceptable way for a prelate to talk. I think that the government is not trying to force Catholic churches to perform gay marriages at all. It is a purely civil matter." Deputy Leader of the Labour Party Harriet Harman said, "We have had prejudice, discrimination and homophobia for hundreds of years. That doesn't make it right ... I don't want anybody to feel that this is a licence for whipping up prejudice."[9] The journalist Dan Hodges wrote: "I can't remember the last time I read a more morally and intellectually bankrupt rant from a senior member of the clergy."[10]

Stonewall awarded O'Brien "Bigot of the Year" at their annual awards in November 2012.[11] The award was criticised by the first minister of Scotland, Alex Salmond, as being "clearly wrong" and "not conducive to a proper and dignified debate on the important issue of equality in Scotland".[12]. Similarly, Stonewall sponsors, Barclays, threatened to withdraw funding if the award was not discontinued.

On 23 February 2013, it was reported by the Observer and other media outlets that Cardinal O'Brien had been accused of "inappropriate acts" involving three serving priests and one former priest within the Diocese of St Andrews and Edinburgh. It was stated that a complaint had been lodged with the Vatican's ambassador to the United Kingdom. A spokesman for the Cardinal said the claims were "contested".[13][14]

On 25 February, O'Brien resigned. This is said to have been "at the personal insistence of Benedict XVI, in one of his last acts as Pope."[15]

On 3 March he admitted "there have been times that my sexual conduct has fallen below the standards expected of me as a priest, archbishop and cardinal".[16]

On 17 March he was alleged to have attempted to grope a priest in Rome on the night of a drinks party to celebrate him being made a cardinal in October 2003.[17]

Partly adapted from a Wikipedia article.