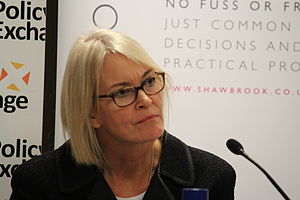 Margot James
Margot James (Margot Cathleen James, born 1957)is a Conservative politician. She has been MP for Stourbridge since 2010.

In 2009 she was listed at number 10 in the Pink News list of 50 most powerful gay, lesbian and bisexual people in British politics. The citation said:

"Although not yet an MP, Margot James wields considerable influence in her role as Deputy Chairman of the Conservative party for Women, a position she has held since 2005. Despite being the only prominent lesbian in the Tory party, she is impatient with the description and stresses her impressive background in business and work as a local councillor. In 1986 co-founded her own company, Shire Health, a PR and medical education business. It was voted ‘Consultancy of the Year’ three times. She later sold it to the WPP Group.

She lives with her partner, BBC TV presenter Jay Hunt."[1]

"James is vice-chairman of the Conservative party, the first openly lesbian Tory MP in history."[2]