Marriage equality refers to the extension to same-sex couples of the ability to get married in the same way as opposite-sex couples. Full same-sex marriage (sometimes referred to as "gay marriage") has now been legally recognised in a number of countries around the world (starting with the Netherlands in 2001) and in some states of the USA. In the UK, demand for same-sex marriage was initially met by the introduction of civil partnerships, which provide almost all of the rights and obligations of marriage. However some differences remain, which led to the campaign to extend marriage as such to same-sex couples.

Marriage in English law was historically defined as "the voluntary union for life of one man and one woman" (Hyde v Hyde and Woodmansee, 1866).

In the early days of the gay rights movement, to call for gay marriage seemed a "pretty strange idea. ... For instance it has been suggested in all seriousness that homosexual marriages should have legal status, and that homosexual couples should be allowed to adopt children."[1]

There are some possible earlier precedents for same-sex marriage, for instance the medieval rite of adelphopoiesis has sometimes been viewed as equivalent to gay marriage. It can also be argued that Roberta Cowell was briefly in a same-sex marriage between having her birth certificate changed to show her as male and being divorced from her wife.

In response for the growing call for some form of recognition of same-sex relationships, the then Mayor of London, Ken Livingstone, introduced the London Partnership Register in 2001. This enabled same-sex couples to have a degree of recognition by an official body of their relationship, but had no legal force. It was open to opposite-sex as well as same-sex couples. Similar registers were set up in other places in the UK. The success of the London Partnership Register, and the lack of any public outcry against it, is thought to have paved the way for the introduction of civil partnerships.

One difference from civil marriage is that sexual intercourse is not mentioned in the law. A marriage can be annulled if it's not consummated (ie if the couple don't have sex together) and one of the grounds for divorce is adultery (ie if one of the couple has sex with someone else): there's no equivalent for either of these in the case of civil partnerships. As a result the Church of England, which officially disapproves of clergy having homosexual relationships, has not banned its priests from entering into civil partnerships, on the grounds that they can do so and still remain sexually celibate.

A number of other countries, starting with Denmark in 1989, have introduced the equivalent of civil partnership, often called civil union, domestic partnership, or registered partnership. Several of these countries have since introduced same-sex marriage: in some cases the registered parterships have simply been converted into marriages, in other cases such as the Netherlands civil unions and same-sex marriage continue to exist side by side.

The Civil Partnership Act 2004 and the Gender Recognition Act 2004 were brought in together. Given that same-sex couples currently cannot be married and opposite-sex couples cannot have a civil partnership, there are special procedures involved when people change their gender. For intance if a married person changes gender and the couple wish to stay together they have to obtain an Interim Gender Recognition Certificate and then have their marriage dissolved. After this the transitioning partner can get a full Gender Recognition Certifcate, and they can then if they wish form a civil partnership.

Couples who have been in this situation have found the process distressing. It can also be expensive, and can affect pension and other rights.

The demand for marriage equality

The Civil Partnership Act was welcomed as a major step forward for gay people, but there has been a growing view that it does not represent full equality.

Marriage equality was not explicitly mentioned in any of the parties' manifestos for the 2010 general election; however a separate document, A Contract for Equalities, issued by the Conservative Party, included in its "Action on LGBT Issues" section the statement "We will also consider the case for changing the law to allow civil partnerships to be called and classified as marriage."[2]

The Government's consultation in autumn 2010 on extending civil partnerships to religious premises found a desire to make civil marriage open to same-sex couples.

The Equal Love Campaign was launched on 26 October 2010, and aims to pose a legal challenge to the UK's ban on same-sex marriage and opposite-sex civil partnership.[3] It is taking a case to the European Court of Human Rights asking for four same-sex couples (including Rev Sharon Ferguson and her partner Franka Strietzel) to be allowed to be married, and four opposite-sex couples (including Katherine Doyle and Tom Freeman) to have a civil partnership.

Other views of marriage

Some LGBT people (and indeed some non-LGBT people) do not support the idea of marriage at all, considering that it embodies outdated patriarchal views of relationships based on property rights. But some argue that as long as marriage exists, it should be available to gay and straight alike. This aspect was debated at the 2011 CHE Conference, with contributions from Peter Tatchell, Andrew Lumsden, Ian Buist and Peter Scott-Presland.[4]

The Scottish Government conducted a consultation exercise starting 2 September 2011.[5] which attracted 77,508 responses. On 25 July 2012 the Scottish Government announced that it will introduce legislation to bring in same-sex marriage.[6] A bill was introduced in the Scottish Parliament on 27 June 2013, and finally passed on 4 February 2014. See Marriage Equality (Scotland) for fuller details.

On 15 March 2012 the Home Office launched a consultation about the introduction of equal marriage in England and Wales.[7] Equalities Minister Lynne Featherstone said: “I believe that if a couple love each other and want to commit to a life together, they should have the option of a civil marriage, whatever their gender. Today is a hugely important step as we consider how to lift the ban on civil marriage for same-sex couples. This is about the underlying principles of family, society, and personal freedoms. Marriage is a celebration of love and should be open to everyone."[8]

The consultation closed on the 14th of June 2012. There were 16 questions, as follows:

CHE and CAGS jointly issued a guidance paper suggesting points that might be made when responding to the consultation.[9]

In August 2012 the House of Commons Library published a 25-page briefing paper entitled "Same-sex marriage and civil partnerships". This included a summary of responses to the consultation by churches and LGBT campaigning organisations.[10]

The Government have subsequently published more details about the responses.[11][12]

In December 2012 the Government published its response to the consultation.[13]

The Culture Secretary, Maria Miller, confirmed in December 2012 that it is now the Government's intention to allow religious weddings to be held by those churches who wish to do so.[14] However the Chruch of England and Church in Wales will be specifically prohibited from conducting same-sex marriages. 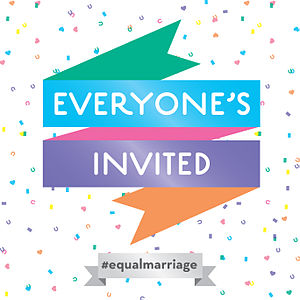 Part of the promotional material the government have produced to promote the bill. Image: from the Department for Culture, Media and Sport
The Marriage (Same Sex Couples) Bill was published on 25 January 2013.[15] Paragraph 1.1 (1) simply says "Marriage of same sex couples is lawful." The remainder of the 52 pages goes into various complications.

Under the Bill as drafted, the Church of England and (with minor differences) the Church in Wales will be prohibited from conducting same-sex weddings. Other religious bodies would be able to opt in (but individual ministers would be allowed to opt out).

The Bill received its second reading in the House of Commons on 5 February 2013 by 400 to 175, a majority of 225.[16] The Bill was then sent to a Public Bill Committee, which met between 26 February and 12 March, and accepted written and oral evidence and scrutinised the Bill line by line. Many amendments were proposed but none of them was accepted.[17] On 9 June the House of Commons formally agreed to continue with the Bill in the new session of Parliament.[18] The remaining two-day Commons debate took place on Monday 20 May and Tuesday 21 May. A number of amendments were agreed during report stage, notably calling for a review of the future of civil partnerships.[19] In third reading, the Bill was passed by 366 votes to 161.[20]

In June 2013 the Bill was discussed in the House of Lords. It achieved a second reading after a blocking amendment by Lord Dear was defeated by 390 votes to 148.[21] The Archbishop of Canterbury and 8 other bishops voted for the amendment, but given the clear majority in both houses in favour of the bill, the Church of England is said to have abandoned outright opposition and the bishops intend to “join with other Members in the task of considering how this legislation can be put into better shape.”[22]

On 15 July 2013 the House of Lords gave the Bill an unopposed third reading.[23] On 16 July the Commons agreed to the amendments that had been passed in the Lords, and on 18 July the Bill received the royal assent and became law, as the Marriage (Same-Sex Couples) Act 2013.[24]

On 10 December 2013 the Government announced that the first same-sex marriages could take place on 29 March 2014, earlier than had been expected. However there would be a longer delay, possibly to the end of 2014, for couples wanting to convert an existing civil partnership to a marriage.[25]

The Act came into force on 13 March 2014, from which date same-sex couples married overseas can have their marriage recognised in the UK,[26] and couples can register for marriages to take place from the 29th onwards.

The first same-sex marriages took place just after midnight on the 29th of March 2013, following relaxation of the rules about marriages being celebrated at specific times of day only.

Consultation on future of civil partnerships

On 24 January 2014 the Government launched a consultation on the future of civil partnerships. Responses can be submitted online or by post. The consultation closes on the 17th of April.[27]

A group called Equal Marriage NI was formed in July 2011 to push for marriage equality. The group included representatives from bodies including The Rainbow Project NI, NUS-USI, GLYNI and the Queen’s University Belfast LGBT Society.[28]

In October 2012, a motion calling for equal marriage was rejected by the Northern Ireland Assembly.[29]

In February 2013, Amnesty International and the Rainbow Project predicted that the LGBT community will use the Human Rights Act and European human rights legislation to force Northern Ireland to introduce same-sex marriage.[30]

In April 2013, the Northern Ireland Assembly voted 53 to 42 to reject a bill introducing equal marriage.[31]

Further votes were held in subsequent years, culminating in the vote on 2 November 2015, which for the first time showed a narrow majority in favour of same-sex marriage.

Note: in the Irish Republic, civil partnerships were introduced in 2010 and the Government announced plans for a constitutional amendment to allow same-sex marriage.[32] The differences between civil partnerships (Irish version) and marriage are highlighted in a paper produced by the Irish organisation Marriage Equality.[33] In May 2015 the constitutional amendment to introduce same-sex marriage was passed by a large majority.

http://www.flickr.com/photos/thedcms/8262056756/ Equal Marriage Timeline from the Department of Culture, Media and Sport