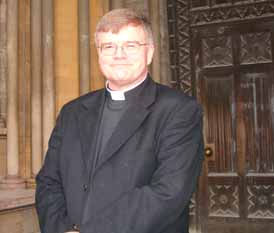 Jeffrey John was born in Tonyrefail (now in Rhondda Cynon Taf, South Wales). He studied at Oxford, and held various church and academic appointments. Since 1976 he has been in a relationship with Rev Grant Holmes. In 2003 it was announced that he would be appointed as Bishop of Reading (a suffragan bishop within the diocese of Oxford), however this caused Anglican leaders in other countries to threaten to split from the Anglican Communion, and the appointment did not go ahead, apparently under pressure from Rowan Williams, the Archbishop of Canterbury. Dr John's relationship (even though celibate) was said to be incompatible with being a Bishop. In 2004 he was appointed Dean of St Albans. In 2006 he and Rev Grant Holmes had a civil partnership.[1]