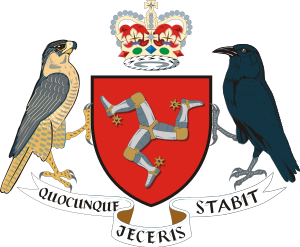 Coat of arms of the Isle of Man 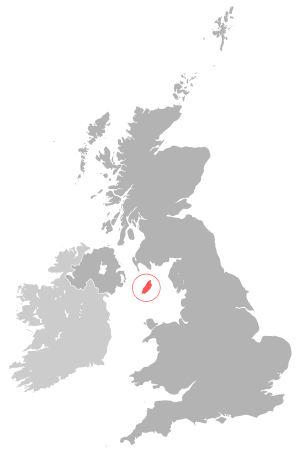 location of the Isle of Man
The Isle of Man (Manx: Ellan Vannin) is an island in the Irish Sea between Great Britain and Ireland. It is self-governing, with its own parliament (Tynwald) and is not part of the United Kingdom or the European Union; as a crown dependency it has the King or Queen of the UK as its head of state (as "Lord of Mann"), and the UK is responsible for its defence and foreign relations. The Chief Minister of the Isle of Man is Allan Bell.

The capital and largest town is Douglas.

The island has its own police force, the Isle of Man Constabulary.

The Isle of Man comprises the Diocese of Sodor and Man within the Church of England (although the island is not part of England).

Sexual relations between men were illegal until 1992. As late as 1991, "twelve men were found guilty of buggery and gross indecency in a group trial. Five of the men received suspended sentences of one-year prison terms and the remining seven were sentenced to two hundred hours of community service"[1]

The Sexual Offences Act 1992 decriminalised gay sex between men with an age of consent of 21, but also introduced the equivalent of Section 28. The age was lowered to 18 by the Criminal Justice Act 2001, and to 16 by the Sexual Offences (Amendment) Act 2006. All of these changes were several years later than in the UK.

The Equality Act 2010 does not apply to the Isle of Man. In particular there is no law against discriminating against LGBT people, as became clear in May 2013 when a lesbian couple found they had no legal redress against a landlord refusing to let them rent a flat.[2] The landlord's action was condemned by the island's chief minister as "ugly prejudice".[3]

The Civil Partnership Act 2011 introduced civil partnerships in a form very similar to the UK.

The Manx Rainbow Foundation has been set up to represent local LGBT people.[4]

In 2015 Allan Bell, Chief Minister of the Isle of Man, indicated that he would support a law introducing same-sex marriage,[5] This is expected to be achieved by merely removing a provision of an existing law that marriage is invalid if it is between two people of the same gender.