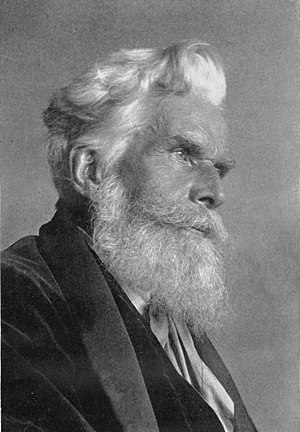 Ellis was born in Croydon, the son of a sea captain, and attended schools in Wimbledon and Mitcham. At the age of 16 he accompanied his father to Australia, and worked from some time there as a schoolmaster. He returned to England in 1879 and studied at St Thomas's Hospital Medical School, but never had a regular medical practice. In 1883 he joined "The Fellowship of the New Life" where he met Edward Carpenter and other social reformers.

His book Sexual Inversion, co-authored with John Addington Symonds, was published in German in 1896, and in English in 1897. It is the first medical textbook on homosexuality, and is considered the first objective study of homosexuality, as he did not categorise it as immoral, criminal, or a disease. In 1897 a bookseller was prosecuted for stocking the book. Ellis authored a six volume Studies in the Psychology of Sex, published from 1897 to 1910. He was the first to study homosexuals outside of prisons, asylums, and clinics. Ellis viewed homosexuality neither as a disease or a crime. Homosexuals suffered from arrested development, and inborn sexual inversion. Homosexuality was the result of a congenital organic variation; individuals had both male and female sexual instincts. The invert lacked the ability to see and feel normal emotional desires toward the opposite sex. Ellis popularised the idea of homosexuality as an inversion, an inborn non-pathological gender anomaly. He estimated the number of homosexuals in the population as being between 1 and 10 per cent, probably slightly over 2 per cent.[1]

Ellis is sometimes said to have originated the word "homosexual" but denied responsibility for it, describing it as "a barbarously hybrid word" (since it is a mixture of Greek and Latin roots). His preferred expression "sexual invert" may have influenced Radclyffe Hall who used this phrase about herself.

Ellis also studied transgender phenomena, for which he coined the term "eonism", and was among the first to distinguish this from homosexuality.

It has been claimed that Ellis was gay. He certainly seems to have had little interest in straight sex. He says that his friends were much amused at his being considered an expert on sex. He was a virgin at the time of his marriage in 1891, and suffered from impotence until the age of 60. His wife Edith Lees is known to have been lesbian, and they had an "open marriage".

The sexological "discovery" of the homosexual in the late nineteen century is therefore obviously a crucial moment. It gave a name, an aetiology, and potentially the embryos of an identity. It marked off a special homosexual type of person, with distinctive physiognomy, tastes and potentialities. Did, therefore, the sexologists create the homosexual? This certainly seems to be the position of some historians. Michel Foucault and Lillian Faderman appear at times to argue, in an unusual alliance, that it was the categorisation of the sexologists that made "the homosexual" and "the lesbian" possible. Building on Ulrich's belief that homosexuals were a third sex, a woman’s soul in a man’s body, Westphal was able to invent the "contrary sexual feeling" Ellis the "invert" defined by a congenital anomaly, and Hirschfeld the "intermediate sex"; the sexologists' definitions, embodied in medical interventions, "created" the homosexual. Until sexology gave them a label, there was only the half-life of an amorphous sense of self. The homosexuality identity as we know it is therefore a production of social categorisation, whose fundamental aim and effect was regulation and control. To name was to imprison.[2]