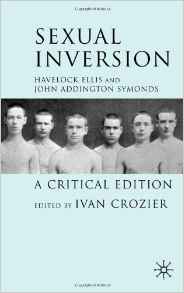 Cover of the Critical Edition by Ivan Crozier
Sexual Inversion is a book by John Addington Symonds and Havelock Ellis, published in 1897.

1n 1892, Symonds, who had written two privately published books about homosexuality, A Problem in Greek Ethics and a Problem in Modern Ethics, approached Ellis with the idea of co-authoring a book on the subject. The idea was that Symonds would write about homosexuality in ancient Greece, and Ellis would cover the medical and scientific aspects. However Symonds died in 1893, and Ellis proceeded without him. The book was published first in Germany and then in England, listing both authors, but Symonds' literary executors insisted that all references to Symonds should be removed. Ellis tried to get the book published omitting Symonds' name and contributions, but had difficulty finding a publisher, and the book was eventually banned in the UK.[1]

The book contained 33 case studies, including six lesbians. One of the case studies ("XVIII -- Englishman, independent means, aged 49") is said to be Symonds himself.[2] Another ("XXXVI -- Miss H, aged 30") is thought to be Ellis's wife Edith Lees, whom he discovered to be lesbian after the marriage.[1]