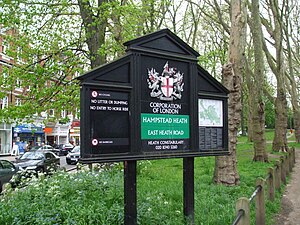 The south entrance to the heath
Hampstead Heath is a large open space in North London wih varying scenery, including the highest point in Inner London. It is mainly within the London Borough of Camden but managed by the City of London Corporation.

There are three open-air swimming ponds, one for men, one for women, and one mixed. There is a small nude sunbathing area next to the men's pond.

The Hampstead Heath Constabulary consists of twelve constables, four with trained police dogs. They have been responsible for patrolling the Heath 24 hours a day since 1992.[1] They have full powers of a constable in relation to the bylaws and legislation of open spaces on the Heath. All criminal offences on the Heath are investigated by the Metropolitan Police.

An area of Hampstead Heath has long been one of the best-known gay cruising grounds in London,[2] and is recognised by the police as a public sex environment.

George Michael has revealed that he cruises on the Heath,[3] an activity he then parodied on the Extras Christmas Special.[4]

In 1992, Alan Amos MP resigned his seat after he was found by the police "engaging in a homosexual act" on Hampstead Heath.[5]