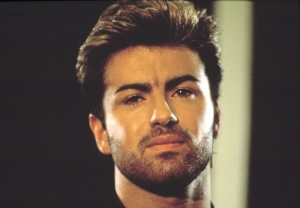 George Michael
George Michael (1963–2016) was a musician, singer, songwriter, and record producer. He rose to fame in the 1980s when he formed the pop duo Wham! with his school friend, Andrew Ridgeley. His first solo single, "Careless Whisper", was released in 1984 and sold about six million copies worldwide.

In 2004, the Radio Academy named Michael as the most played artist on British radio between the period of 1984–2004.[6] The documentary A Different Story was released in 2005; it covered his personal life and professional career.[7]

In a 2007 interview, Michael said that he had hidden the fact he was gay because of worries over what effect it might have on his mother.[8] At the age of 19, he told Andrew Ridgeley and close friends that he was bisexual.[9]He also told his sister, but friends advised him not to tell his parents about his sexuality.[8]

Speaking about his time with Wham! in the 1980s, Michael said: "I used to sleep with women quite a lot in the Wham! days but never felt it could develop into a relationship because I knew that, emotionally, I was a gay man. I didn't want to commit to them but I was attracted to them. Then I became ashamed that I might be using them."[9] In 2009, Michael said: "My depression at the end of Wham! was because I was beginning to realise I was gay, not bisexual."[10]

Michael established a relationship with Anselmo Feleppa, a Brazillian dress-designer, whom he had met at the 1991 concert Rock in Rio. Six months into their relationship, Feleppa discovered he was infected with HIV. Michael later said: "It was terrifying news. I thought I could have the disease too. I couldn't go through it with my family because I didn't know how to share it with them - they didn't even know I was gay."[10] In 1993, Feleppa died of an AIDS-related brain haemorrhage.[11] Michael's single Jesus to a Child" is a tribute to Feleppa, as is his 1996 album Older.[12] In 2008, speaking about the loss of Feleppa, Michael said: "It was a terribly depressing time. It took about three years to grieve, then after that I lost my mother. I felt almost like I was cursed."[13] h In 1996, Michael entered into a long-term relationship with Kenny Goss, a former cheerleader coach and sportswear executive from Dallas. They had homes in Dallas[14] and an £8 million mansion in Highgate, North London.[11] In November 2005, it was reported that Michael and Goss would register their relationship as a civil partnership in the UK,[15] but because of negative publicity and his upcoming tour, they postponed it to a later date.[16]

On 22 August 2011, Michael announced that he and Goss had split two years earlier.[17] Goss was present at Michael's British sentencing for driving under the influence of marijuana on 14 September 2010.[18]

Questions of Michael's sexual orientation persisted in public until 7 April 1998, when he was arrested for "engaging in a lewd act" in a public toilet in a park in Beverly Hills, California. He was arrested by an undercover policeman named Marcelo Rodríguez, in a sting operation using so-called "pretty police." In an MTV interview, Michael stated: "I got followed into the restroom and then this cop—I didn't know it was a cop, obviously—he started playing this game, which I think is called, 'I'll show you mine, you show me yours, and then when you show me yours, I'm going to nick you!"[19]

After pleading "no contest" to the charge, Michael was fined $810 and sentenced to 80 hours of community service. Soon afterwards, he made a video for his single "Outside" which was obviously based on the public toilet incident and featured men dressed as policemen kissing. Rodríguez claimed that this video "mocked" him, and that Michael had slandered him in interviews. In 1999, he unsuccessfully brought a US$10 million court case in California against the singer (it was ruled that Rodríguez, as a public official, could not legally recover damages for emotional distress).

In 2007, Michael said that hiding his sexuality made him feel "fraudulent", and his eventual outing, when he was arrested in 1998, was a "subconsciously deliberate act".[20] After the incident, Michael became explicit about his sexuality and his relationship with Kenny Goss which began in June 1996.

On 23 July 2006, Michael was again accused of engaging in anonymous public sex, this time at Hampstead Heath.[21] The anonymous partner was stated (wrongly, as it turned out) to be 58-year-old Norman Kirtland,[22] an unemployed van driver. Despite stating that he intended to sue both the News of the World who supposedly photographed the incident and Norman Kirtland for slander, Michael admitted that he cruises for anonymous sex[23] and that this was not an issue in his relationship with partner Kenny Goss.[24]

Michael has won numerous music awards throughout his 30-year career.

He received a "Lifetime Achievement Award" in the Pink List 2011 and was ranked 95 in the Pride Power List 2011.