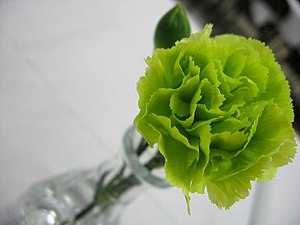 The shape of the carnation has been said to symbolise the anus, while the colour green was thought to be favoured by homosexuals.[2][3]

At the opening night of his play Lady Windermere's Fan in 1892, Wilde persuaded members of his circle to wear green carnations in their buttonholes.[3] When asked what all this meant, Wilde replied, "Nothing whatever, but that is just what nobody will guess."[3]

The novel The Green Carnation includes characters based on Oscar Wilde and Lord Alfred Douglas. It is referred to disparagingly in Wilde's play The Importance of being Earnest, first performed that year.

In 1895 an article in Punch mocked at the "Decadents" who

"nightly gathered at any of the theatres where the plays of Mr WILDE were being given. Nightly, the Stalls were fulfilled by Row upon Row of neatly-curled Fringes surmounting Button-holes of monstrous size."[4]

By 1910, C D Wilton, writing in the journal Modern Man, noted that wearers of the green carnation had

"brought the inoffensive buttonhole into grave disrepute – so much so that our tailors to-day make no proper provision in dress suits for a floral decoration."

In more recent times the green carnation has been re-adopted as a gay symbol.