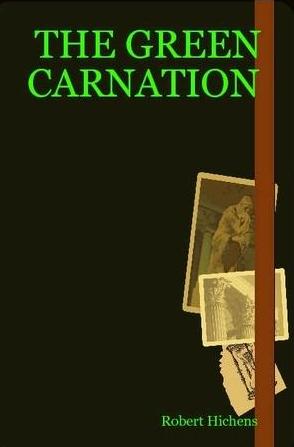 Cover of a modern reprint
The Green Carnation is a novel by Robert Hichens, first published anonymously in 1894. The main characters are closely based on Oscar Wilde and Lord Alfred Douglas whom the author personally knew. It was an instant succès de scandale on both sides of the Atlantic.

The reviewer for The London Observer wrote, "The Green Carnation will be read and discussed by everyone... nothing so impudent, so bold, or so delicious has been printed these many years."

The book features the characters of "Esmé Amarinth" (Wilde), and "Lord Reginald (Reggie) Hastings" (Douglas). The words put in the mouths of the hero and his young friend in the story are mostly gathered from the sayings of their originals. Robert Hichens spent nearly a year "in the company of the men" and was able to accurately recreate the atmosphere and relationship between Oscar and Bosie.

In The Importance of being Earnest, Lady Bracknell discovers the novel on Jack Worthington's bookshelves and comments "This appears to be ‘a book about the culture of exotics ... It seems a morbid and middle-class affair".

The book was withdrawn from circulation in 1895, but by that time the damage had been done. Wilde soon stood three consecutive trials for Gross Indecency and was sentenced to two years at hard labour. The Green Carnation was one of the works used against him by the prosecution.

The Green Carnation was republished in 1948 with an introduction by the author, which also included Wilde's letter to the Pall Mall Gazette, 2 October 1894 denying he was the anonymous author, and reissued in paperback in this form in 1992; it was republished again in 2006 as a hardcover, with a foreword by the American author Anthony Wynn.