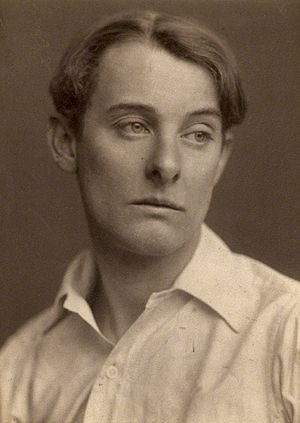 Lord Alfred was the third son of John Douglas, 9th Marquess of Queensberry. He was born at Powick, Worcestershire, educated at Winchester College(1884-1888) and studied at Magdalen College, Oxford(1889-1893), but did not take a degree. In 1891, while he was still an undergraduate, his cousin Lionel Johnson introduced him to Oscar Wilde, who was by then a successful author. They began a torrid affair, which was to lead to Wilde's downfall. Douglas's father took violent exception to the relationship, and in 1895 left a note for Wilde accusing him of being a "somdomite". This led to Wilde unsuccessfully suing the Marquess for libel, largely at Bosie's instigation, and Wilde's subsequent arrest and imprisonment. In 1894 Bosie had published a poem Two Loves, which ended with the line "I am the Love that dare not speak its name",[2] which Wilde famously expanded on in court.

In later life Bosie turned against the memory of Oscar Wilde, denounced homosexuality, and in 1902 he married the bisexual poet Olive Custance.

In 1923 he was sent to prison for criminal libel, after falsely accusing Winston Churchill of publishing a misleading account of the battle of Jutland.