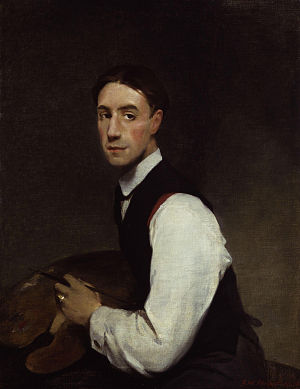 Glyn Philpot (Glyn Warren Philpot, 1884–1937) was an artist who specialised in society portraits, though he later turned to Symbolist paintings, still lifes and sculpture.

Philpot was born in Clapham, but the family moved to Herne in Kent shortly afterwards. He studied at the Lambeth School of Art (now the City and Guilds of London Art School) in 1900, and later at the Académie Julian in Paris. After spending some time in Spain, he painted Manuelito, a portrait of a circus boy, which launched his career, bringing in many commissions for portraits, which made him fairly affluent and an establishment figure. He produced portraits of Stanley Baldwin, Oswald Mosley, the King of Egypt and the poet Siegfried Sassoon. He also produced sculpture and canvases on classical and religious themes. He regularly drew male models, and used the studies in his pictures – in later years he often used black men as models. During the First World War he was a war artist, and painted portraits of admirals.

In 1923 he was elected RA, and was the youngest academician at the time. By now he was a successful artist, and he was able to buy a house in Sussex. He began to feel that his work should be more spiritual, and he changed his style, using simpler forms and brighter colours, and produced canvases in the Symbolist style. Unfortunately, the critics and the general public were unhappy with the change, and his work no longer sold, so that he had to sell his Sussex home. He began to paint still lifes, and also painted a number of fine portraits of Henry Thomas, his Jamaican servant.

In 1931 he visited Berlin, where he encountered the decadent gay culture of the Weimar Republic, which invigorated him, and led him to change to a pared down modernist style in his final years. He put on four exhibitions in five years, which put a strain on his health, and he died of a stroke two days after a dental operation. 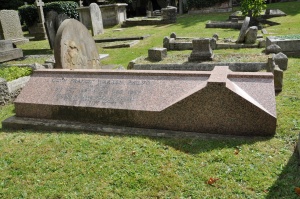 Philpot's grave at Petersham
He was buried in the churchyard of St Peter’s Church in Petersham.[1]

Though he converted to Roman Catholicism, he was homosexual, which created a tension between his private life and his public art. He produced paintings on religious themes, while also painting male nudes and portraits of handsome young men, some of whom may have been friends or lovers. Philpot had a long and difficult relationship with the artist Vivian Forbes, whom he met during the First World War. Forbes committed suicide the day after Philpot’s funeral in Westminster Cathedral.[2]

After his death his work was neglected for many years, but an exhibition in 1984 at the National Portrait Gallery brought his work to a new audience. Several of his paintings also featured in Tate Britain’s "Queer British Art: 1861-1967" exhibition in 2017.

He was a member of the International Society of Sculptors, Painters and Gravers.[3]

There is a GLC Blue Plaque in Lansdowne Road, Notting Hill, on the studios he shared with Charles Ricketts, Charles Shannon, and other artists.[4]