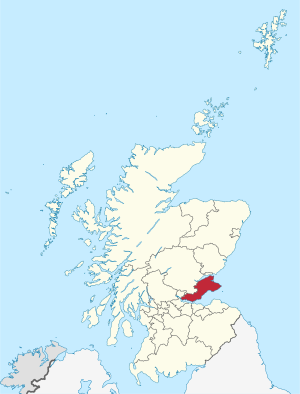 Fife shown within Scotland
Fife is a local government area in Scotland. Prior to 1974 it was a county. From 1974 to 1996 it was a region with three subsidiary districts ( Dunfermline, Kirkcaldy and North-East Fife). Since 1996 it has been a unitary authority. Fife includes the towns of Kirkcaldy, Dunfermline, Glenrothes and St Andrews. Smaller towns include Newport-on-Tay, Cupar and Anstruther. Other historic places include the village of Falkland.

The Fife Constabulary was replaced in 2013 by the Police Service of Scotland.

The Flavours of Fife is an LGBT youth group based in Kirkcaldy, and there are similar groups elsewhere in Fife.[1]

Fairness, Race Awareness and Equality Fife (FRAE Fife) and Fife Independent Disability Network (FIDN) were at one time members of the LGBT Consortium.[2]