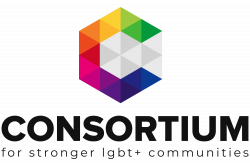 Consortium logo
Consortium (The Consortium of Lesbian, Gay, Bisexual and Transgendered Voluntary and Community Organisations, previously known as the LGBT Consortium) is a national organisation focusing on the development and support of LGBT groups and projects in the UK.

The LGBT Consortium was set up in 1998 to include lesbian, gay, and bisexual organisations; trans organisations were added in 2003. At its annual conference on 26 January 2019 the Consortium changed its name to just "Consortium" and adopted a new logo and strapline, to include the term "LGBT+":

"Our communities are diverse and evolving. Consortium wants to reflect these developments and ensure we are more inclusive in the way we talk about our communities - both now and in the future. We have therefore shortened our name and shifted our language to LGBT+ in our strapline."[1]

In 2022 some of the Consortium members supported a boycott of the government's planned LGBT Conference 'Safe to be Me' which was to be held in London to coincide with the 50th anniversary of the first ever London Pride marches [2].

The Consortium maintains an online Directory listing its members. In 2011 it listed around 450 organisations as members: see Consortium members, 2011.[3]

In 2013, following a programme of pruning inactive groups and asking groups to positively confirm their membership, the number of members was around 180, but by 2018 it had climbed again to 355.

See List of Consortium members which includes some organisations that may no longer exist or have been renamed.