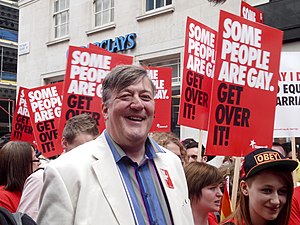 He was brought up in Norfolk and had a troubled childhood, being expelled from schools and spending time in gaol for credit card fraud. He then resumed his education and won a scholarship to Queens' College, Cambridge. He joined the Cambridge Footlights where he met Hugh Laurie; the two have worked together on many television shows over the years.

Since 2003 he has been the host of the comedy panel game QI.

In 1997 he took the role of his hero Oscar Wilde in the film Wilde, a role that he has said he was "born to play".

He had a 14-year relationship with Daniel Cohen and has said that he is 90% homosexual, but has been attracted to women on occasion.[1]

He was rated a "National Treasure" in the Independent on Sunday's Pink List 2011 and was listed for a "Lifetime Achievement Award" in the Pink List 2012. He was ranked number 2 (and highest-placed UK person) in the World Pride Power List 2013, despite not having been listed at all in 2012.

In January 2015 he married his partner, the stand-up comedian Elliott Spencer.