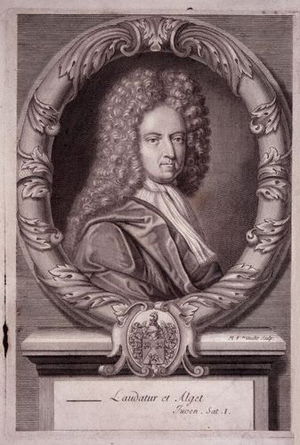 Daniel Defoe in 1706
Daniel Defoe (c1660–1731) was the author of Robinson Crusoe and Moll Flanders and many other books and pamphlets.

Defoe was born (probably in the City of London) as "Daniel Foe" and became a merchant. He engaged in political journalism, notably campaigning for the union of England and Scotland. Some of his satirical writings were misunderstood, and at one point he was imprisoned and made to stand in the pillory.

In recent years it has been suggested that Defoe may have been bisexual. The former MP Leo Abse wrote a book on this subject, at one point calling Defoe "William III's catamite.[1] The historian John Martin also claims that Defoe was gay, and in particular that he had an affair with the politician Robert Harley, Earl of Oxford and Earl Mortimer.[2] However these assertions have been criticised as unconvincing.[3]