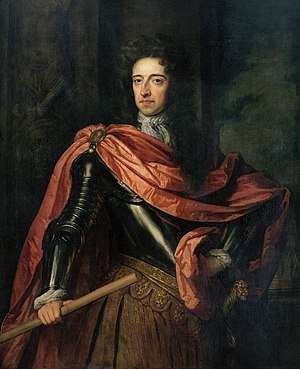 William III by Sir Godfrey Kneller
William III (1650–1702) was Prince of Orange from Birth, Stadtholder of the Netherlands from 1672, and King of England, Ireland and Scotland from 1689. He came to power in England following the "Glorious Revolution" of 1688, which overthrew the Catholic King James II and established Protestant rule. He ruled jointly with his wife, Mary II, until her death in 1694, after which he ruled alone. Both William and Mary were great-grandchildren of James I.

William and Mary had no children, and on William's death the throne passed to his cousin, Queen Anne. William had only one acknowledged mistress, Elizabeth Villiers (related to George Villiers, favourite of James I).

During the 1690s, William was suspected of homosexual relations, particularly with two Dutch courtiers, Hans Bentinck and Arnold van Keppel. Historians have disagreed as to whether these stories were correct.