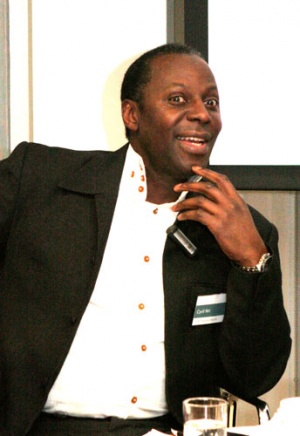 Cyril Nri
Cyril Nri (born 25 April 1961 in Nigeria) is a British actor, writer and director. He attended the Young Vic Youth Theatre in Waterloo, London. He trained at the Bristol Old Vic Theatre School, and is probably best known for playing the role of Chief Superintendent Adam Okaro, in the long-running ITV police drama The Bill. He also had a cameo role as Graham, a barrister colleague of Miles and Anna, in several episodes of the cult BBC TV drama series This Life.

Nri's family are Igbo; they fled the country in 1968 prior to the end of the Nigerian Civil/Biafran War. His mother is originally from Barbados.[1] He moved to Portugal when he was seven, and later to London. Nri attended Holland Park School in Kensington and appeared in a school production of Three Penny Opera. He has lived in South London since the 1980s.

Cyril Nri has been married, and he now identifies as gay.[2][3] He has two grown-up children. He was one of the original patrons of LGBT History Month, along with Sarah Weir.