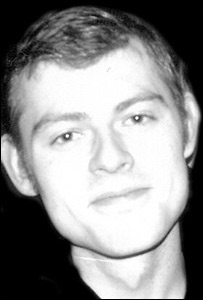 Jody Dobrowski
Jody Dobrowski (1981–2005) was an assistant bar manager who was beaten to death on Clapham Common in a homophobic attack.

The murderers were arrested a week later. They admitted the crime and were sentenced to life imprisonment with a minumum term of 28 years. The sentences were passed in accordance with Section 146 of the Criminal Justice Act 2003 which provides for stiffer sentences where the crime was motivated by homophobia.

The TV film Clapham Common (2007) is partly based on the murder.

On 7 October 2012 the 17-24-30 No to Hate Crime Campaign hosted a fundraising event at the Two Brewers, Clapham, to remember and mark the seventh anniversary of the murder, and on 14 October 2012 a memorial bench was dedicated in his memory.[1]