From LGBT Archive
(Redirected from City of Brighton and Hove)
Jump to: navigation, search 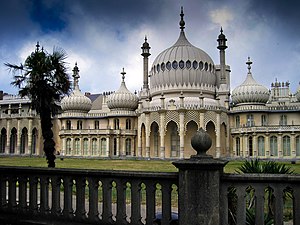 The Brighton Pavilion
Brighton is a seaside town in East Sussex. In 1997 it merged with Hove, and the merged authority became the City of Brighton and Hove in 2000.

In August 1822, George Wilson, a servant from Newcastle-upon-Tyne, was accused by a guardsman he had met in the Duke of Wellington public house in Pool Valley of having offered him a sovereign and two shillings to go with him onto the beach to "commit an unnatural crime".[1]

In 1836 Stanley Stokes died after cutting his own throat.

In the later 19th century the philanthropist Angela Burdett-Coutts spent part of each year at the Royal Albion Hotel with her companion Hannah. The couple were devoted to each other, socially recognized as a pair, and even sent joint Christmas cards. When Hannah died in 1878, Baroness Burdett-Coutts said she was utterly crushed by the loss of "my poor darling, the companion and sunshine of my life for 52 years".[1]

Ivan Massow was born in Brighton.

in 1986 a television documentary programme reported that there was an estimated population of gay men in Brighton of 15,000 [2].

The 2001 census revealed that Brighton and Hove had the highest proportion of same-sex households in the country at 1.29%: some 2,544 individuals said that they lived with a person of the same sex.[3]

Brighton Pride is held every year, normally in August (1st September in 2012).

The Brighton Ourstory Project was set up to collect and preserve the lesbian and gay history community in the area, but closed in 2013.

The Brighton AIDS Memorial was unveiled in 2009.

In 2017 the Brighton Museum hosted an exhibition about the Museum of Transology, curated by E-J Scott.[4]

In 2022 the film My Policeman starring Harry Styles as a 1950s Brighton gay police officer, was set in the area of Brighton and adjoining Lewes District Council area.

Brighton has long been noted for its active gay scene, with a large number of gay venues, several of them in the Kemp Town area. St James's Street hosts a number of gay venues, of which the Bulldog claims to be Brighton's longest-running gay bar. The Queen's Head, not far from St James's Street, was a gay pub for a number of years. Revenge, the Amsterdam and Legends are on the sea front, and Doctor Brighton's near the front.

MindOut is a mental health service run by and for local LGBT people.

The Allsorts Youth Project is for local young people.

Brighton and Hove LGBT Switchboard was set up in 1975.[5]

Brighton and Hove Sea Serpents is a gay rugby club, founded in 2015.[6]