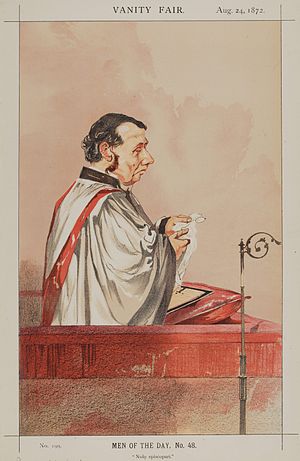 "Nolo episcopari" (Latin for "I do not wish to be made a bishop") Chromolithograph caricature of Vaughan in Vanity Fair, 24 August 1872
Charles John Vaughan (1816-1897) was an English clergyman, and headmaster of Harrow School from 1845 to 1859. His sudden resignation from Harrow, and his turning down the chance to be a bishop in 1863, caused comment at the time, but the real reason was kept hidden for over 100 years.

Homosexual behaviour, often of an abusive nature, was rife in Harrow in the 1840s and 1850s. When Vaughan was told about one such case, he clamped down on it immediately, forbidding the sending of love letters between boys, and the use of female names. However Vaughan himself was having a passionate affair with one of the pupils, Alfred Pretor, who told his friend John Addington Symonds about it. Symonds refused to believe it until Pretor showed him some letters from the Headmaster. Symonds was deeply disturbed by this, and in 1859, when he had become an undergraduate at Oxford, confided in the Corpus Professor of Latin, John Conington. Conington encouraged Symonds to tell his father, who immediately wrote to Vaughan, threatening to expose him unless he resigned at once.[1] The threat was renewed four years later, which forced Vaughan to withdraw his acceptance of appointment as Bishop of Oxford.

In later years Vaughan became Master of the Temple (equivalent to Vicar of the Temple Church in the City of London), Dean of Llandaff, and President of University College Cardiff.