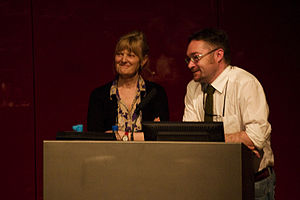 Richard Parkinson (right) with Bridget Leach at an Egyptological event in 2009
R B Parkinson (Richard Bruce Parkinson, born 1963[1]) is a curator at the British Museum and the author of A Little Gay History: Desire and Diversity Across the World.

He was educated at Barnard Castle School, County Durham and Queen's College, Oxford. He joined the museum in 1991, having previously taught at Oxford University. He is an expert in Ancient Egypt, and has published a number of books (popular as well as academic) on Egyptian subjects.[2] His particular interest is Egyptian poetry, some of which has references to same-sex desire, which, as a gay man, he had taken a particular interest in.[3]

When the Museum was approached to help with an LGBT history trail, he volunteered to help, and this led to the publication of A Little Gay History.[3]

A Little Gay History covers same-sex desire through history, with references to a number of objects in the British Museum's collection.[4] He has said that his favourite among the objhects is the novel and film Maurice:

"I read the novel at school, and saw the film while a student at Oxford, and by chance I met my partner exactly three years to the day after seeing the film. So they happen to mean a lot to me. Those are not entirely rational reasons, but then a history of human desire cannot be—and perhaps should not be—entirely rational."[5]

Cover of A Little Gay History