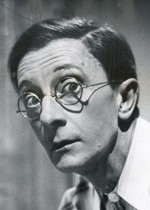 Charles Hawtrey
Charles Hawtrey (George Frederick Joffre Hartree, 1914–1988) was a comedy actor, noted for taking part in many of the Carry On films.

He was born in Hounslow, and attended the Italia Conti Academy of Theatre Arts in London, taking his stage name from the actor Sir Charles Hawtrey (1858–1923). He appeared in many plays and films from an early age, also performing as a pianist and a boy soprano.

In 1958 he appeared in Carry On Sergeant, the first of the Carry On films, and was a regular in the series until 1972, with parts in 23 of the films.

In 1968 he moved to Deal. He was well known for promenading along the seafront in extravagant attire, waving cheerfully to the fishermen, and frequenting establishments patronised by students of the famous Royal Marines School of Music.[1]

Hawtrey guarded his relationships very carefully, perhaps no surprise in an age when male homosexual behaviour in Britain was illegal and punishable by a prison sentence.

"Hawtrey was a feisty and courageous little actor who was always defiantly his own man and couldn't care less what people thought of him. As a flamboyantly gay man, he attracted the kind of attention that was fraught with danger in the 1950s. But unlike many homosexual public figures, he never pretended to be anything other than his true self. "No, bring me a nice gentleman," he insisted when photographers wanted him to pose with starlets."[2]

His outrageous drunken promiscuity however, did not portray him in a positive light to an unsympathetic world; nor did his general demeanour and increasing eccentricity earn him many (if any) close friends.[1]

Kenneth Williams recorded a visit to Deal where Hawtrey owned a house full of old brass bedsteads which he had hoarded, believing that "one day he would make a great deal of money from them".[3]

A lot of strain was put on him by his mother, who suffered senile dementia in later years. Another anecdote recounted by Williams[3] described how his mother's handbag caught fire when her cigarette ash fell in. Hawtrey, without batting an eyelid, poured a cup of tea into it to put out the flames, snapped the handbag shut and continued with his story. Williams also recounted his gathering up of the leftover sandwiches from a buffet for the Carry On cast.[3] However Williams was envious of Hawtrey's easier acceptance of his sexuality:

"He can sit in a bar and pick up sailors and have a wonderful time. I couldn't do it."[4]

He gained headlines after his house caught fire on 5 August 1984[4] after he went to bed with a much younger man and had left a cigarette burning on his sofa. Newspaper photographs from the time show a fireman carrying an emotional, partially clothed and sans toupee Hawtrey down a ladder to safety.[5]

In October 1988, he was taken to hospital after breaking his leg in a fall and was found to be suffering from peripheral vascular disease, brought on by a lifetime of heavy smoking. Hawtrey was told that in order to save his life, his legs would have to be amputated. He refused, allegedly saying he preferred to die with his boots on,[5] and died later that month in a Kent nursing home in Walmer.[6]

Based on a Wikpedia article.